History of the Virginia Speleological Survey by: Dave Collings

The history of cave exploration and study in Virginia is among the oldest and richest in the United States. We know from archeological studies that Native Americans were exploring and utilizing certain caves in southwestern Virginia almost 10,000 years ago. Literature dating back to the 1700's, when the mountains of western Virginia were still a part of the frontier, contains occasional references to caves. Often these references cite historical notes and legends concerning the caves and their first explorations.

Documented study of caves in the state can be traced as far back as George Washington and Thomas Jefferson. Both men were known to visit caves in Virginia and what is now West Virginia. In addition to such explorations, as a young surveyor, Washington helped map Natural Bridge in Rockbridge County. Jefferson not only visited caves, but wrote detailed descriptions of them. He also drew some of the earliest cave maps in the country (Madison Saltpetre Cave in Augusta County and Blowing Cave in Bath County).

More recently, the first serious catalog of Virginia Caves was published by William M. McGill in 1933. The Caverns of Virginia concentrated on the state's well-known commercialized caves, and included 9 maps. McGill also described features found within the caves and included geological profiles. McGill published a follow up to his first book in 1946. This version contained information on over 50 caves spread out over 24 counties.

In the early 1940's, as groups of cavers in the area combined forces to help form the National Speleological Society, exploration of Virginia caves intensified and became more focused. The late 1930's, '40's, and '50's produced a lot of the initial exploration (and mapping) of many of Virginia's largest and most well known caves. Certain groups began to stake claim to specific areas of interest. Bill Stephenson and other cavers from the Washington D.C. area journeyed into the northwestern and west central areas of the state. Earl Thierry, Roy Charlton, and others were active in finding, exploring, and mapping caves from Allegheny County all the way down into the southwestern counties. Cavers from VPI began an involvement in Giles and Bland Counties that continues to this day. Other projects, too numerous to mention, also got underway as "organized" caving came into its own. 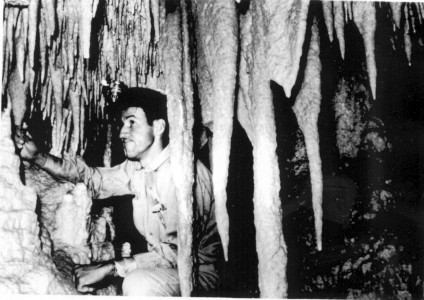 All of this increased activity led Henry H. Douglas to form the Virginia Cave Survey in 1954. The Virginia Cave Survey was an official project of the NSS and was directed by Douglas until 1964, when he published the Caves of Virginia. Over 1,800 caves were included in the book, along with descriptions and maps.

John R. Holsinger produced much of the information about the caves in the far southwestern counties that appeared in Caves of Virginia. In 1964, Holsinger took over the reins of the Virginia Cave Survey from Douglas. Those southwestern counties continued to produce lots of new caves in the 1960's and 1970's (as they do today). Other parts of the states saw their own share of finds as well. This time period saw a wealth of caving in Virginia and many miles of mapped passage as explorers also became dedicated surveyors.

All the work from this era culminated in 1975 with the publication of Descriptions of Virginia Caves. This work included listings on 2,319 caves. Some of the material in Caves of Virginia was updated and revised. Approximately 200 caves listed in Douglas' book were deleted because they were found to be redundant reportings of the same cave or were based on leads considered too vague to be located during subsequent fieldwork. The new total of 2,319 in Descriptions of Virginia Caves represented an increase of 680 confirmed caves. Many maps were included.

In the late 1970's and early 1980's, the amount of exploration and survey in Virginia had begun to drop off. Certainly not everywhere, but some of the state-wide enthusiasm generated as cavers worked towards the publication of Descriptions of Virginia Caves had lessened. There were also rumors floating around that Virginia was “caved out.”

This attitude began to change in the mid-1980's. Some of the area's grottos (or other groups of cavers) began to take on a county cave survey as their grotto project. Other groups focused on a particular ridge or drainage system. Goals usually revolved around a systematic survey of all known caves in the chosen county/area. Virgin or previously unreported finds were always welcome too. Many of the groups have included a more thorough inventory of each cave's resources to accompany maps and descriptions.

Perhaps in part a result of these common goals, renewed enthusiasm for exploration and surveying has resulted in abundant information and many new maps. One of the direct beneficiaries of all this activity has been the VSS. As of January 2002, our database included reports of almost 4,000 caves, 1700 more than were listed in Descriptions of Virginia Caves. Many of the largest caves in the state have been found/surveyed in those twenty years. Quite a few others have been resurveyed only to find that they were much longer than previously suspected. It will be a long time before Virginia is “caved out.

”For more about the history of the VSS, read this on the VAR Website":
http://www.varegion.org/var/theVar/history71/pg173Survey.html